Even though you never had a Lithuanian nationality (citizenship) you may “restore” it if at least a single parent, grandparent or great-grandparent had it. In this case, the usual requirements for naturalization (10 years of residence in Lithuania, speaking good Lithuanian) will not be applicable.

Technically there are two types of these certificates (one for proving a right to restore nationality and one for certifying Lithuanian descent), but they are nearly identical in their meaning.

According to a controversial decision by the Constitutional Court of Lithuania dual nationality is only permitted in Lithuania in rare circumstances. Under the 2016 Law on Nationality such “rare circumstances” have been greatly expanded however: they include all the Lithuanian citizens who were expelled from Lithuania or left the country before 1990 03 11 and their descendants (up to great-grandchildren), except for those who left willingly to Soviet Union. If you are not among those eligible for dual citizenship then you‘ll have to renounce your current nationality after gaining Lithuanian one.

History of the Nationality Law shows that these norms have been changed especially frequently (e.g. before 2006 Constitutional Court decision special circumstances for dual nationality encompassed everybody who did not repatriate). In the future, the right to dual nationality may thus be further limited. Dual nationality (under normal circumstances) is prohibited by the 1st part of the Constitution which means this could be changed by referendum alone and the Referendum procedure in Lithuania is one of the toughest among democratic countries, largely rendering the referendums on constitutional change impossible to succeed (even if the majority would support wider application of dual nationality). Therefore if one could get a dual nationality under a current law perhaps he/she should hasten to seek it.

Dual nationality is controversial in Lithuania for a couple of reasons. On the one hand, Lithuania seeks to foster a connection with a million-strong Lithuanian diaspora to prevent their complete assimilation and have them as a support for the “dying out and emigrating” Lithuania. On the other hand, there is a fear of a situation such as happened in 2008 Georgia where Russia issued its own nationality to thousands of people from local ethnic minorities and then, due to disagreements with Georgian policy, invaded the country justifying it by the “protection of Russian nationals”.

We help restore the Lithuanian nationality

We help you collect the necessary documents, we search the Lithuanian archives, we draft the Lithuanian nationality application, we keep contact with Lithuanian institutions and more. We take away the hard work associated with getting Lithuanian citizenship.

Even if you have already received a negative answer from the Lithuanian Migration Department regarding your citizenship, or the Migration Department has put your case on hold, there is often still a possibility to reach a positive outcome through a Lithuanian court. Our attorney has experience in such cases and could represent you as well.

Moreover, we also help with acquiring residency permits in Lithuania and the right-to-nationality certificates.

366 Responses to “Restoring the Lithuanian nationality” 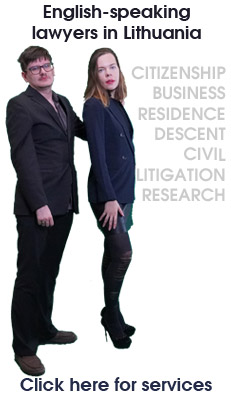