Lithuania has a Roman legal system based on laws. Legal precedents are subordinate to laws but also recognized. Laws are drafted and adopted by the Parliament. Other institutions (including municipalities) may adopt bylaws which could not contradict the laws.

Nearly every law and bylaw in Lithuania has been adopted post-1990 as the country completely reversed its course after dropping the Soviet shackles. Much of the legal system has been modeled on various long-standing laws of Western European countries as the pre-occupation (1940) Lithuanian laws were deemed too dated to reinstate.

The Constitution has been adopted by referendum in 1992.

There is no single Lithuanian Code in a way there is a US Code. Instead there are multiple codes for different spheres of law, the most important of them are: Civil Code (includes commercial law), Criminal Code, Civil Procedure Code, Criminal Procedure Code, Administrative Penalties Code and the Labour Code.

There are also many shorter laws that govern particular areas which are not covered by the Codes. For example, in the intellectual property sphere, there are separate laws for patents, trademarks, copyright/related rights, plant breeds, topographies, and designs.

Sometimes the same issues are governed by several laws in which case the least abstract one typically holds precedence.

In Lithuania, there are two systems of courts.

Criminal and civil cases are heard by the Common courts of which there are three instances. 49 district (apylinkės) courts are the first instance for minor cases. The district court decisions may be appealed to five county (apygardos) courts which also serve as the courts of the first instance for major cases. These major cases may then be appealed to the single Appellate Court (Apeliacinis teismas). And finally, there is the Supreme Court (Aukščiausiasis teismas) which is the third (cassation) instance for all cases.

The Constitution is safeguarded by Constitutional court the decisions of which are largely political and have been criticized for limiting democracy when popular opinion opposes that of the establishment. Whenever some court or other major institution thinks a law might be in breach of Constitution it applies to the Constitutional Court for an answer.

In addition to courts, there are pre-judicial institutions which are in some cases voluntary, in others a required step in dispute resolution.

The litigation time in Lithuania largely depends on case and varies greatly. Arbitration may be stipulated in contracts. 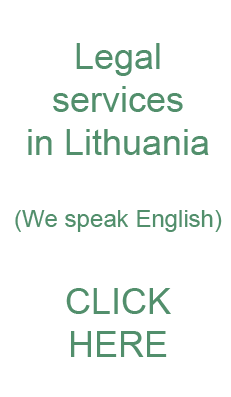